Welcome to the ancient Parish Church of Ss Peter & Paul, a common dedication in Kent.  There has been a church in Borden for over 800 years.  It is thought that the church was built by monks from Leeds Abbey which is about 8 miles away and they ministered here for the first three centuries of its life.  The first Vicar was appointed in 1160, although their names are known only from the 13th entry onwards.  You will find them listed on the wall beside the tower entrance.

On the right hand side of the church door, in the porch, you will see the remains of a holy water stoup. This would have been filled with water specially blessed and visitors would have dipped their finger into the water and made the sign of the cross before entering such a holy building.  The free standing one has replaced it. 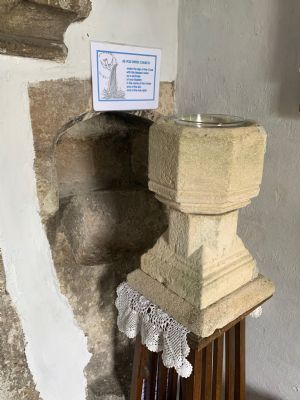 As we enter the church we find on the left hand side the Font where people are baptised or christened into the Church (there is no difference between the two).  The font is filled with water which is specially blessed by the priest.  Baptism symbolises death to an old way of life and resurrection into new life, in some parts of the Christian church, people are fully immersed underwater at their baptism, just as Jesus was baptised in the River Jordan by John.  The font basin is in the perpendicular style (1350-1530); it was found in the grounds of Borden Hall and restored by the Borden family in thanksgiving for the safe return of its family members from the First World War.  The cover is a replica of one shown in an 18th century print of the church. 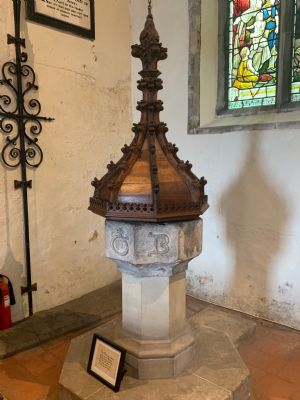 We now move to the Nave and if you look up at the north wall you will see a Medieval Wall Painting of St Christopher carrying the Christ Child.  You can also see the outline of a building and a figure thought to be a priest.  Legend has it that St Christopher was a huge giant of a man called Reprobus. His job was to carry people across the river and one day he carried a little child.  As he crossed the river the child got heavier and heavier and he realised he was carrying Christ with the weight of the world on his shoulders.  Pictures of St Christopher, the patron saint of travellers, would have been opposite the church door so that people could ask for prayers for a safe journey or give thanks for a safe arrival. 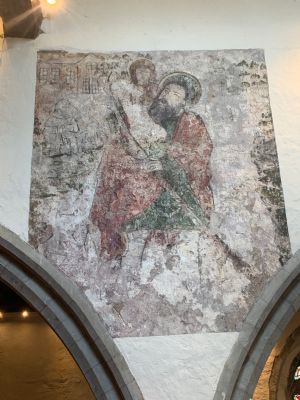 The nave was once the entire church and if you look outside of the East Wall you will see the original quoins or corner stones, from before the aisles were added.

The corbel at the back of the South aisle by the tower arch suggests that the south aisle was built in the 13th century with the north aisle being added some 100 years later. 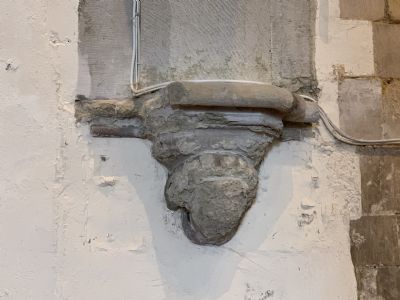 The pulpit, containing much Elizabethan panelling, was erected in 1938 by Mrs Levy of Borden Hall in memory of her son Lewis who was churchwarden and parish clerk for many years.  It replaced a Victorian marble pulpit.  The figures of Ss Peter and Paul above the reredos by the East Window came from that pulpit and were saved from destruction.

The chancel and the choir were rebuilt in the 19th century with a copy barrel roof.  Also at this time all the choir stalls and pews were replaced removing all the old Georgian Box Pews.

Beyond the Altar Rail is the sanctuary where the priest celebrates Holy Communion at the altar of God.  The light burning by the small door to the left hand side of the altar reminds us that is the Aumbry where the Blessed Sacrament is reserved, ready for use when people are ill or unable to come to church. 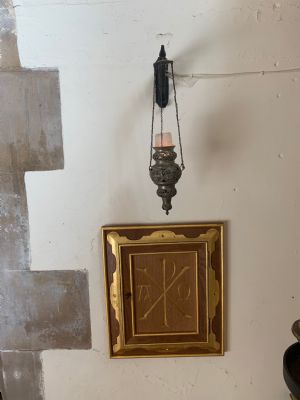 In the Lady chapel we find a splendid memorial to Captain Robert Plot, father of Dr Robert Plot. This was taken down for restoration in 1988 and a fragment of wall painting was discovered behind it.  A picture of this is on the wall in the south aisle.  It is thought the entire walls were probably covered in paintings at one time, there is evidence of this in the North Aisle too.  People did not have access to books and most could not read, so they learnt texts of the bible by heart and the prayers that were painted onto the church walls. This included different bible stories and images of the Saints. 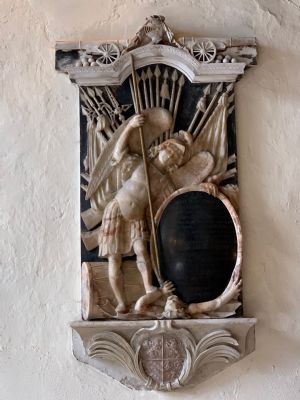 On the floor of the Lady Chapel, against the East wall are two small brasses.  The one on the left is of a civilian, William Fygges dated from around 1450 and that on the right is of a priest and Canon William Fordmell, Vicar of Borden 1470-1514.  He is depicted wearing Mass vestments and a fur almuce or cape.

There are a number of burial vaults in the Lady Chapel and south aisle.  In front of the Lady Chapel Altar you will see the small black stone to the memory of Ralph Milway, who died at the age of 4, son of the former Vicar .  The large stone slab to the left of the Altar bears the crests of the Napleton family who gave a large silver flagon and a paten to the church.  They are now in the treasury at Canterbury Cathedral, the family crests appears on the flagon - it shows a squirrel -  look at the stones and try reading the interesting inscriptions on the other stones too.

A small doorway leading off the outside wall of the south aisle gives access to a stone staircase which climbs the south turret.  Halfway up the staircase is a doorway in the south wall and if you look across to the opposite wall the outline of another doorway can be seen.  This is what remains of the Rood Loft which would have run across the top of the rood screen and separated the front of the original church, where the priests and the monks worshipped from the rear, where the people were.

Crossing in front of the High Altar we come to the North Aisle at the front of which is the organ, installed in 1908.  This occupies the site of the old vestry where parish vestry meetings would take place in the days when the church was responsible for most aspects of local government, including the relief of the poor.  The present priests vestry was added in 1913 and is entered by the door at the west end of the north aisle. 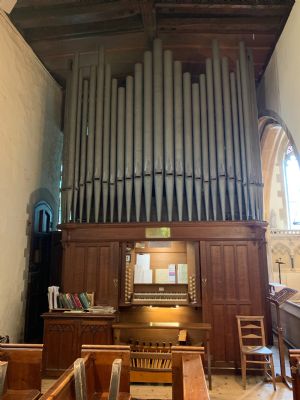 Moving up the aisle, a brass plate on the wall tells us that “in a vault near this place are deposited the remains of William Barrow”. This is probably one of the burials under the front section of the aisle - we know there are burial vaults further up the aisle too.  On the wall alongside the window is an oval memorial to Dr Robert Plot who lived in Sutton Baron and founded the Ashmolean Museum in Oxford. 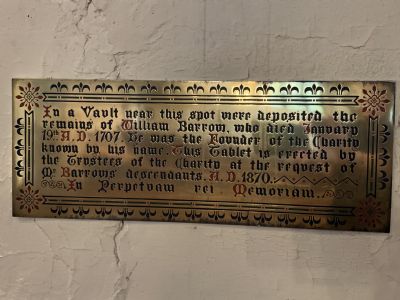 The vestry is where we keep the priests vestments and where preparations are completed before the services.  We no longer need to have vestry meetings to deal with relief of the poor, education or the roads.

The tower is the oldest part of the church dating back to 1160AD.  It is built of Caen stone and you will notice the fine Norman arch with dog tooth carving.  There was similar carving outside the West Door of the church, but it has now been worn by the effects of the weather.  The floor of the tower was once the same level as the church but it was raised in 1863 when the Victorian Font was placed in there (this was later removed in the 1970’s) There are eight bells in the Tower which weigh a total of 4 tons 7 cwt, the tenor bell is the largest at 21 cwt.  They were cast at the Whitechapel Foundry in 1802, replacing the former peal of six bells.  Church bells are rung to call people to services, to celebrate happy events such as weddings and a single bell is tolled before a funeral - 1 strike for each year of the Reston’s life.  The tenor bell can also bee struck during Mass to let people know that the priest has reached the part of the service where he consecrates the bread and wine, traditionally people would stop their work and cross themselves at this point. 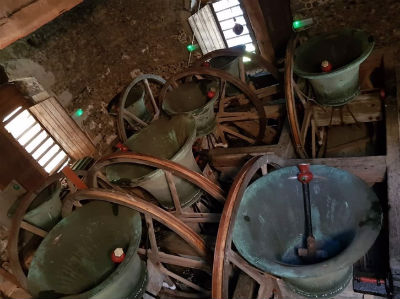 On the wall of the tower is a large board on which are written the names of people who gave money or gifts to the church in years past.  You will see there that William Barrow gave an estate of £500 on his death, for the benefit of the poor in the parish.  That bequest continues today in the form of the Barrows Trust and it regularly makes payments to the elderly of the parish who can apply for assistance from the trustees. There is also provision for grants to be made to students in the parish for such things as school uniform, book or other items to assist them.  Many youngsters apply for help during their years at university.  The trustees meet in a room at the top of Barrow House (opposite The Maypole). The charity also built the Old Borden Grammar School which is now the College of Further Education in College Road.

Above this board you will see a small window with a pointed top, showing Norman architecture and you can gain an indication of the thickness of the walls by looking at the window recess.